Here's a rule that writers taking courses are often told: Write about what you know.

Take my most recent novel THE TROUBLE WITH DILLY, for example. 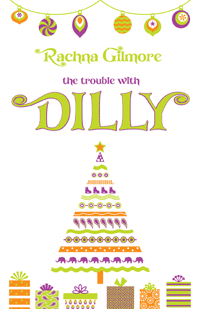 It's about a girl, Dilly -- wildly imaginative, exuberant and impulsive -- who lives with her family in a large Canadian city above their family grocery and Indian food take out, and who plays hockey. I've always wanted to write about a girl who played hockey, but I don't know (or rather, didn't know) much about it. Nor did I know anyone who runs a grocery store.

So I did my research. I visited corner grocery stores in a variety of places to try and get the feel of them, to get Dilly's family store right, a sense of the layout and items they'd stock. The atmosphere and pulse.

I also spoke to family, friends and neighbours who knew about hockey, followed hockey games on TV and even went to local Pee Wee hockey game, and met up with the coach and a few girls who played in the team, to hear their stories and viewpoints. It was a huge amount of fun, and a wonderful glimpse into the hockey culture.

I also had to research Christmas customs in Hungary, immigration challenges for new immigrants, some aspects of Chinese culture, and much more.

It was all part of the fun, part of widening my view of life and expanding my horizons of interest.

I like to think this story is a quintessentially Canadian Christmas story, celebrating as it does cultural diversity and hockey.

But it would never have been written if I stuck only to what I know. For that matter, nor would most of the other books I've written.

A writer starting out is often looking for a set of rules to follow -- ones that will teach him/her everything she/he has ever wanted or needed to know about writing, and that will guarantee success, fame and fortune.

And of course, there are courses and books a-plenty with lists of rules about writing.

Here's the rule with which I start all my creative writing workshops:

There are no Golden Rules.

Each writer must find and discover her/his own unique approach to writing, find out what works for her/him.

You can learn the craft of writing -- well, aspects of it, anyway -- but no one can teach you the art of writing. You learn that by writing, by trial and error and finding out what works for you.
Posted by Rachna Gilmore at 12:03 PM No comments:

Part of good story-telling is finding the right voice to fit the story. Here's something to bear in mind: please let the language and words serve the story, not the other way around. Don't slaughter story at the altar of your writerly ego. (Oh, I know, it's tempting!)

For me, the best books are where the writer is invisible. Where I'm caught in the story, where wonderful phrases, if there are any, are absolutely integral and true to the story. Where the author isn't pirouetting around with flash phrases that stick out like a sore thumb, shrieking, "Look at me, look at me!" Or leaping about with grandiose phrases, no matter how lovely, with a cheesy, "Look, aren't I clever?"

Beautiful language can only take you so far. After a while, the reader's admiration can ebb into frustration and even downright hostility because instead of engaging with the story, the language sticks out its knobbly feet and demands attention and homage to the author. Perhaps in an attempt to divert attention from the lack of story?

Eschew the urge to pontificate, with or without marbles in your mouth, no matter how stunning the marbles.

Say it clear.
Posted by Rachna Gilmore at 4:32 PM No comments: