Writing In The First Person -- Some Common Pitfalls

I've always loved writing in the first person because it forces me to get inside my character's heart, head and soul and to explore and delve into her/him and then become her/him.

But to write convincingly in the first person, you need to uncover and discover that character's voice -- come up with a voice that is fresh, distinctive and completely convincing.

Here are some common pitfalls I've noticed in books written in the first person:

-- having a generic voice. This might work in a third person narrative (well, only maybe, because let's face it, generic is blah, no matter what point of view you chose to write in) but it is particularly grating in a first person narrative. If it doesn't work and the voice is unconvincing, the book will fail to engage the reader even if the story is exciting.

-- in writing for children, having a voice that is too old. Adults can often have trouble connecting with the child's inner vocabulary and intensity, and the rhythms of speech and thought.

-- using vocabulary that is too old for a child narrator.

-- using expressions that are too old for a child narrator. (Warning here: yes, kids today say "like" almost incessantly, but if you use it in a story the way a kid might in real life, it'll trip the reader and mask the story. The trick is to use it sufficiently to make the voice sound like a kid's voice, but not enough to annoy the reader.)

Sometimes it takes many rounds of edits to get that voice right. In the early drafts of my first children's novel, A FRIEND LIKE ZILLA I found myself writing in a voice that was distant -- it sounded like an adult looking back and remembering. I had a superb editor, Charis Wahl, who pointed this out. It took many re-writes to get that voice right, to make the voice of the main character, Nobby, ring true, and seem convincing and particular to her.

Some books are like that. Part of finding Nobby's voice and making it convincing, was getting to know Nobby and making her convincing.

And then there are books where the voice just comes to you. When that happens it's a gift. It happened with my picture book A Screaming Kind of Day. Scully was real to me from the get go. I had her voice clear in my head from the get go.

But regardless of whether the voice of your character is clear from the start or not, it's imperative, if writing in the first person, to make it convincing and unique and true to the character.
Posted by Rachna Gilmore at 3:26 PM No comments:

Following on my previous post on creative cross fertilization and specifically, the inspiration of music, here are some thoughts for writers: Try writing to music. See what it does for you. Try listening to a variety of music and see what best suits your story. Will your story change, or does your writing style change with different types of music? Is it different if you listen to classical as opposed to rock, or heavy metal, or folk, or blues, or blue grass? Here’s another thought: What is your character’s favourite music? Figuring it out offers a sideways glimpse into your character to flesh him/her out in a way that perhaps mere biographical details can’t. This might never show up in your writing, but you’ll know that detail about your character, and it’ll inform your writing. And what kind of music does your character hate? This too tells you something about her/him. Oh, and try this – if your character were a piece of music, which one would it be? When I started to ponder that, I decided that Dilly, in The Trouble With Dilly, would be Mozart’s Eine Kleine Nachtmusik, or perhaps Bach’s Third Brandenburg Concerto. Oh, both are my favourites! Red – a character with whom I’ve spent a great deal of time lately, as I’ve re-worked THAT BOY RED – might, I think, be Beethoven’s Pastoral. Or perhaps some East coast fiddle music. What music best represents your character?
Posted by Rachna Gilmore at 3:17 PM 2 comments:

Recently, I attended a concert at the Shenkman Arts Centre in Orleans, performed by the chamber orchestra I Musici de Montreal, founded and conducted by Yuli Turovsky. They played some Mozart to start, and then the work of a composer I’d never heard of before – Modest Moussorgsky, called Pictures at an Exhibition, but with a twist. The screen above the musicians, showed an animated version of the art of Viktor Hartmann, a friend of the composer. It was Hartmann’s art that inspired Moussorgsky to write the music he did.

In the performance I attended, the art and the music came together, with the art cleverly reinterpreted with surrealistic flow and movement (animated, if you like) by the composer’s daughter.

I love the idea of art inspiring music which in turn inspired the flowing animation of the art we saw, all of which inspired me to write this entry in this blog.

It reminded me that any form of art inspires and stirs creativity. That exposure to other artistic mediums can enrich, inform, and enhance our own.

For example, when I was writing my picture book story, Roses for Gita, (a sequel to my picture book Lights for Gita) a crucial, and I think magical, scene in the story fell into place during a Suzuki violin concert in which my daughter was playing. The inward expressions of the kids as they made beautiful music together made me suddenly realize that music is a language of its own, and that a difficult character in the story Roses for Gita, Mr. Flinch, might just be reached through music. I had an image of him, this grumpy, cantankerous old man, playing the violin, his face inward and absorbed with the music, caught in its delight.

That image sent a chill through me and I knew it was right for the book.

In my next post on Oct 22th, I'll suggest some ways in which you can use music to enhance your writing as well as find out more about your characters.
Posted by Rachna Gilmore at 3:01 PM 5 comments:

The New Grown Up -- Catching Time 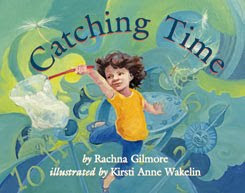 Here it is, the cover of the newly arrived as a grown-up book, CATCHING TIME. Illustrated by the wonderful Kirsti Anne Wakelin. I've just figured out how to put pictures on this blog, and I had to show off Kirsti's fine work. I love the whimsy of Kirsti's art, the energy and movement.
It perfectly echoes the hurry and bustle of trying to catch time.
Posted by Rachna Gilmore at 5:10 PM No comments:

A New Book Is Born -- Or Rather, Grown Up

The process of creation is an interesting and circuitous one -- there's the initial euphoria of creation, the doubt and loathing of the various and multitudinous stages of editing, the inevitable putting away...

This book was started in the nineties, fiddled with endlessly, forgotten, then rediscovered.

When I rediscovered it, I found that I loved the concept but that the story didn't work because the VOICE wasn't right. (I've posted before about the importance of voice.) It wasn't the voice of a child, and as such it didn't echo and resonate with the emotional core of a child.

Once I re-wrote the story in a real child's voice, it quickly found a home.

Perhaps it's curious -- or not -- that this story, about catching time, should have taken so much time to come to fruition. Time, that wily old trickster, at play again.

After the story was accepted by Red Deer Press, it still went through endless fiddling and editing, (I was fortunate to work with Peter Carver, a wonderful editor) repeated reading aloud to taste the ebb and flow of the words, before it was ready for print.

By that point, the book felt like a surly teenager I couldn't wait to see the last of.

And then...and then, the book comes back, all bound and printed, and suddenly it's like the surly teenager has grown up.