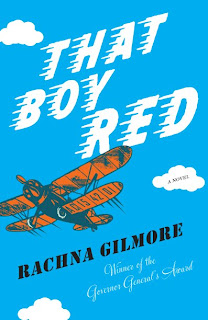 My latest book, a middle-grade novel THAT BOY RED (HarperCollins Canada) will be out in bookstores in mid-April. Set in Prince Edward Island during the Depression the book follows the escapades – sometimes hilarious, sometimes hair-raising – of eleven-year-old Roderick “Red” MacRae, and his coming of age through a particularly tumultuous year.

Seeing this book in print feels in a strange and satisfying way like coming full circle. Like most authors, I am repeatedly asked where I get my ideas and about the stories behind the story. Sometimes it can be difficult to remember, so organic and convoluted is the process.

But the story behind RED is a long road that winds back to my childhood.

When I was a girl growing up in India and then England, one of my favourite books was ANNE OF GREEN GABLES by L.M. Montgomery. I loved that book. I read and re-read it umpteen times, as well as its sequels, until the world in which it was set, Prince Edward Island, became as familiar to me as mine. Or perhaps more familiar in the magical way in which imagined and internal worlds can be more real than external ones.

I'm not quite sure what it was about this book that so gripped me, so worked into my inner being. Perhaps it's because Anne's world was so different from mine.

My world when I first met Anne (how I met her is another story, for my next blog post), when I first walked through the magic portal of that book, was Mumbai, a sprawling city teeming with people, hot, dusty, vibrant, a cacophony of colour and sounds.

Anne’s world was almost the polar opposite – rural, contained, peaceful, with familiar nooks and crannies, beloved fields, wild flowers, woods. I crossed roads with blaring traffic and a maidan – a field – to get to school, a field filled with people, the grass trampled by many feet. Anne walked through the woods, through Violet Vale to school. What were violets? What were mayflowers? I had hibiscus, boring, familiar old hibiscus.

I was fascinated by Anne’s cosy family life with Matthew and Marilla, the meals eaten together, the predictability and stability of chores. The satisfaction of contributing to the household. My parents, as upper middle class Indians, had an active social life and servants to do all the work. We children rarely ate dinner with our parents. (And dinner was always the evening meal; the mid-day meal always lunch.) I was wistfully envious of Anne’s chores – washing dishes seemed delightfully cosy and homey. So...pioneerish!

And I was fascinated by Anne’s climate. Oh, the magic of snow.

I’d never seen snow. My seasons consisted of hot, hotter and wet – the wet part being the monsoon, when you could count on rain every single day, and after which you could count on no rain every single day. The summers were dusty and dry, and only mad dogs and Englishmen went out in the noon day sun. And of course, children. If I went out anywhere in the summer, I’d collapse in a sweaty puddle – that’s right, sweat, no lady-like glow, never mind manly perspiration – under the fan when I got home. Anne snuggled into sweaters. I only ever wore a light cardigan on those odd winter days when the temperature dipped below hot.

The Anne books became beloved friends. They were a constant thread through my life when I moved with my family to England. And like all good friends, the books eased the longing and be-longing that such a seismic shift creates.

When I decided after graduating from University to come to Canada, the Anne books were my impetus for choosing Prince Edward Island.

It was there that I met and married my husband. It was there – during my fourteen years on the Island – that I jerked past my inertia and my fear of failure to finally embark on my dream of writing. It was there that I delighted in my first publication success – a book published by an Island press, and one that became a best-seller.

And this book, THAT BOY RED, my latest work of fiction – this book was inspired by my father-in-law’s anecdotes about growing up as a young lad in rural P.E.I. during the Depression.

I don’t think I ever dreamed or imagined when I was a girl in India – and my youthful dreams were wildly extravagant; I was not a parsimonious dreamer – that one day I’d live on the Island, marry an Islander and, inspired by my father-in-law’s anecdotes, write a book about a boy growing up on the Island, set in the era following Anne’s time.

Sometimes life is stranger – oh, so much neater, so much sweeter – than fiction.
Posted by Rachna Gilmore at 12:00 PM